In an effort to help fighters get to know reputable managers in the business, Wombat Sports will be doing profiles in the next couple weeks. 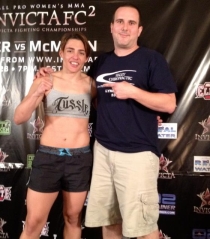 Chris Vender has been a manager since 2008, when he help a young Brazilian fighter in Amanda Nunes make the transition from Brazil to the U.S. He helped her receive a contract to Strikeforce. This started him being the manager to many South American fighters including InvictaFC signees Vanessa Porto, Duda Yankovich, and Ericka Almeida.

Wombat Sports: Tell us how you became a manager and who you currently manage.

Chris Vender: I’ve been a MMA fan for a long time and when I moved to NJ in 2004 I started training with my two boys under Edson Carvalho. Edson is a Carlson Gracie Black belt and had gyms in NJ and Salvador Brazil.Through the years I became very involved with the gym and I helped his fighters and started learning the business.

In 2008, I brought my older son to compete at a Pan Am tournament and train at Edson’s gym in Brazil. There was this 20 year girl that was kicking ass in the first class I walked into. It was Amanda Nunes. We hit it off, became friends and I started helping her when I got back to the states. I ended up harassing the matchmaker for Strikeforce for about 6 months until he finally called me one day and offered her a deal.
Amanda ended up fighting Julia Budd and it’s been full steam ahead since then.

Soon after, Vanessa Porto contacted Amanda about me and I started working with Vanessa and started MMAU Management. Once Invicta started I was fortunate enough to sign some of the top brazilian athletes there. I also manage Juliana “Ju Thai” Lima, Duda Yankovich, Ericka Almeida, Juliana Aguiar and some other up and coming women.

I currently have 4 athletes signed to Invicta.

I also own an MMA academy called The MMA University in NJ. Vanessa is currently living and training there and Ju Thai is coming out to train for the summer with us. We are trying to make MMAU the place to train for women athletes on the east coast. .

Wombat:  What, in your opinion, does a manger do?

Vender: As a Manager, I have to help navigate and grow the athlete’s career. It starts with booking the right fights for the athlete. I do alot of video research scouting possible opponents for my fighters. You have to negotiate all the athletes contracts and try and get everything you can for them.It also involves getting sponsorships, promoting your athlete with the media and making sure everything is taken care of so the athlete can concentrate on their job. With my Brazilian girls there little extra things like visas and translators.

W.S.: What are three qualities you like to see in a potential client?

Obviously they have to be talented. I like to see progression from one fight to the next.

You def need great work ethnic to be a quality pro mixed martial artist. You won’t make it without it.

Good character goes without saying really. I take care of my fighters so I don’t want to help someone that is not deserving of it. Good energy and good karma are important.

W.S.: What are three qualities you feel make a great manager?

You do it from the heart because you want to help the athlete and because you love this sport of MMA. Sometimes you actually lose money with a fight but being part of this sport makes it worth it.

Again, good character is important because as a manager you are put in a position of trust.

Work Ethnic is important because you have to also be on the lookout for new opportunities for your fighters.

W.S.: Many fighters have stated that they have bad experiences with managers and have simply done a lot of the duties of a manager themselves. Why should they reconsider getting manager?

C.V.: A good manager is an asset to any fighter. But a bad manager can make you feel like it’s not needed. It’s important to have someone that is truly in your corner to help you.

W.S.:  Female fighters in general have more demands than males. What specifically qualifies you to manager female fighters?

C.V.: I dont know what necessarily qualifies me to but like I said early, I started my career with WMMA and I have been a big supporter of WMMA through the years.I’m just happy to be play a small part of it’s growth.

W.S.: What is your ethical responsibilities as a manger? Are you willing to put it in writing?

C.V.: To keep it professional just like you would in any other job. With female fighters there are extra things that you don’t encounter with male fighters but you still have to maintain yourself in a professional manner.

W.S.: What are your expectations in a client?

C.V: I would not be opposed to adding something in a contract if a client asked me to.It would have to get reviewed of course but my contracts are very athlete friendly already.

W.S.: What is your philosophy when it comes to how many clients you have?

C.V.: I like to have quality over quantity. I want to work with athletes that I feel have the potential to do great things with my help. I do think it’s beneficial to sign with a manager that has other females though. More opportunities will arise for.