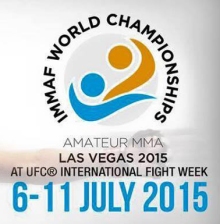 Twenty female fighters from 15 countries are tentatively set to compete in Vegas to become world champions.

The International MMA Federation World Amateur Championships will take place July 6 – July 11 at the Sands Convention Center in Las Vegas. Tuff-n-uff will be the host promotion for the event. The country qualifying tournaments have concluded and a list of potential fighters are currently being vetted.

Our news editor MarQ Piocos has been contributing to IMMAF’s expert panel that advises on applicants Pro/Am statuses, as part of the tournament qualification process. Competitor eligibility is also subject to review by UMMAF, the commission and promoter in the USA before the list can be finalized.

At present, Team USA has the most representatives with four, with Team Sweden having three.

Here is the current list of female participants (subject to change):