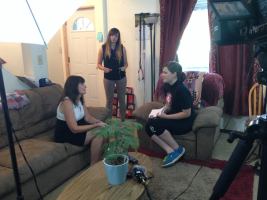 As many of you may know I worked all summer on the female fight movie “Four Months Until Fight Day”. Initial shooting ended in early August and I have been working hard editing the past month; hence the lack of news on a regular basis and infrequent podcasts.

I am happy to report that the first solid cut of the movie is done and has been submitted to the world famous Slamdance Film Festival. I will be entering it into a few more as well, including the Artemis Film Festival this coming spring.

Before we get there, I am doing something that is a rarity for an independently produced movie. I will be doing a test screening for charity.

One of my actors, Shawn Hertel, is the vice president of the Dandelion Foundation, a local non-profit dedicated to helping prevent child abuse, family violence, and provide education and intervention to all groups of people. I liked the idea of working with a charity on this project and wanted to do a showing to raise money for their cause. It also gives me a fresh audience to see how the project is progressing and to give me an opportunity to make some tweaks before the final cut hits the festival circuit. Our actual premiere will take place in December.

The test screening will be on October 15th in Great Falls, Montana. It will take place the night before Intense Championship Fighting’s “Tough Enough to Fight in Pink” event, which will have several female fights on the card. ICF provided me a cage to shoot the fight scenes for the movie.

Two of my main actresses will be there, Shelby Decker and Lori Glassco, and we will all take part in a Q & A session following the screening.

More info on the screening and where to get tickets (if you happen to be near Great Falls about that time) go to the movie’s facebook page here.

For those asking, we expect the movie to be on an on-demand service in late spring once we are done with the festival rounds.

Will keep you posted on happenings, but for now make sure to like “Four Months Until Fight Day” on Facebook for updates.