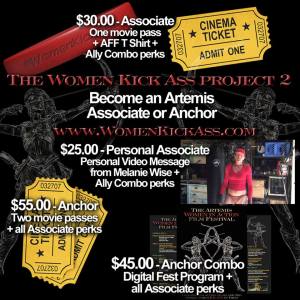 After the dust settles in the match between UFC champion Holly Holm and Miesha Tate,  you can see them on the big screen in Los Angeles.

The film, starring Tate, Holm, and InvictaFC champion Cris “Cyborg” Justino, tells the tale of Winsor, a women looking to find out what happened to her sister and enters the world of female underground fighting. A who’s who of female boxing is also featured, including world champion Heather Hardy and the Serrano Sisters.

The movie is one of several female action driven movies making their debuts at the festival. Wombat Sports news editor MarQ Piocos has two movies in consideration for the festival, the MMA movie “Four Months Until Fight Day” featuring Charmaine Tweet and the documentary “Neung Roy”; in association with 8Limbs.us.

Artemis is currently raising funds to offset their costs for the festival, and one of the perks you can get is a ticket to a movie of your choosing. You can also get some cool swag. You can contribute by going to WomenKickAss.com.

The physical venue for the event will be announced in the coming weeks.

You can check out the trailer for “Fight Valley” below.