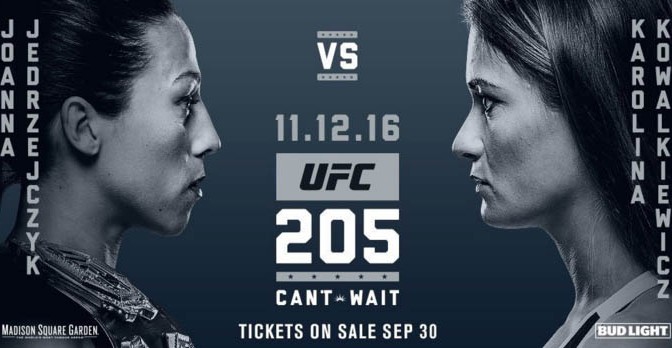 Cris Cyborg Justino made weight at 141 pounds on Friday ahead of her match with Saturday against Lina Lansberg in Brasilia, Brazil for UFC Fight Night. Lansberg tipped the scales at 140 pounds. The match will air on Fox Sports 1 as the main event.

Strawweight champion Joanna Jędrzejczyk will face her fellow Polish fighter Karolina Kowalkiewicz in what will be the co-main event at UFC 205. Both undefeated, it has been a match many fans (especially in Poland) have been looking forward to.

Coming her her title loss to Amanda Nunes, Miesha Tate will return to action taking on a surging Raquel Pennington. Tate was on a six fight winning streak before losing her belt to Nunes, while Pennington is riding a three fight win streak.

The two join Katlyn Chookagian versus Liz Carmouhce on the card.

Jędrzejczyk versus Kowalkiewicz and Tate versus Pennington are expected to be on the main card, while Chookagian versus Carmouche will air on Fox Sports 1.

A press conference will be held Tuesday to officially set up the card.

A follow up to the Primer we posted Friday morning. InvictaFC and Barb Honchak both issued statements regarding the promotion stripping Honchak of her flyweight title.

Our attempts to contact Barb had been met with silence for a significant amount of time. We would have loved to have her defend the title.

I understand that Invicta would want to take the “interim” off the title since I have been out for an extended amount of time. But, I would have like the opportunity to relinquish and I would have like to have known by means other than Twitter.

Honchak has not defended her title in two years and Friday night’s title match between Jennifer Maia and Roxanne Modafferi will be for the undisputed title.

MMA Fighting is reporting Mizuki Inoue is out due to a torn ACL and maybe out for a year. Inoue was one on a short list of challengers for Angela Hill’s strawweight title.

A reminder that Rizin MMA is Sunday with two female bouts: Gabi Garcia versus Anna Malyukova and Kyra Batara versus Kanako Murata.