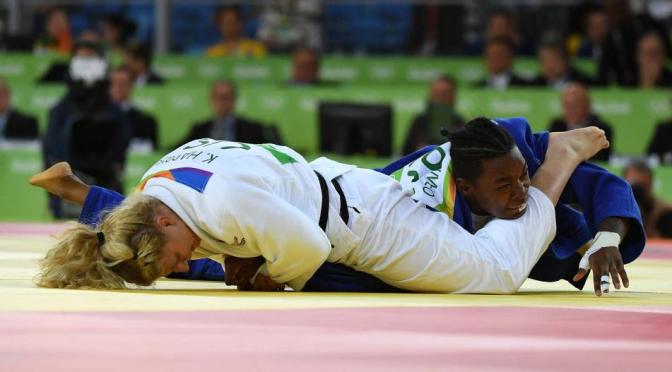 After months of speculation, Olympic Gold Medalist Kayla Harrision has decided to sign World Series of Fighting to begin her MMA career.

USA Today broke the news Thursday. The judoka fielded several offers from some of the best promotions on the planet and landed in the Vegas based promotion. Harrison will be doing commentary for the WSOF starting on their major New York City card New Years Eve, and will continue working as their on-air voice until she sees fit to make her actual in cage debut; which she is estimating will be a year.

The IMMAF announced they are stripping Jamie Herrington of her 2015 World Gold medal and suspending her for four years after a positive test for amphetamine.

Herrington issued a statement as she was taking cough syrup after feeling nauseated and sick during the weight cut for the competition.

Herrington is appealing the decision.

The winner will face Isis Verbeek in the semi-finals in early 2017.

The other semi-final sees Tiffany van Soest taking on Jessica Gladstone tentatively in December in Germany, but we suspect they will delay it to January 20th in Los Angeles.

Rizin will have five female pro bouts as a part of their New Years Eve event in Tokyo Japan.

Only one match is set as wrestler Miyuu Yamamoto (2-0) will face Legacy champion Andy Nguyen (3-3).

Gabi Garcia, Rena Kubota, Kanako Murata, and Kanna Asakura are also slated to be on the card with opponents yet to be determined.

Rizin will also hold amateur MMA and grappling tournaments throughout the weekend.

TUF 23 vet Helen Harper will move up to flyweight as she takes on Bruna Ellen at Bellator 169 in Dublin, Ireland December 16th. The card will air on Spike.

England’s Harper (4-1) won her opening round bout of the tournament against InvictaFc vet Amy Montegro. She would lose a decision to fellow countrywoman Lanchana Green in the quarterfinals.

Ellen (2-1) is coming off a decision loss to Jessica Middleton in her Bellator debut.

Valerie Leturneau has a new opponent for  UFC 206 in Toronto.

Poliana Botelho suffered a broken hand in training and had to drop out of the fight. Undefeated Brazilian Viviane Pereira (11-0) will take her place.

The fight will either air on Fox Sports 1 or stream on UFC Fight Pass December 10th.

InvictaFC’s Pannie Kianzad told MMA Roasted this week that she has been out with a back injury suffered during training in Thailand. She told her manager she will be able to return to the cage starting in December.

Two more fights that were announced this week for December 9th: