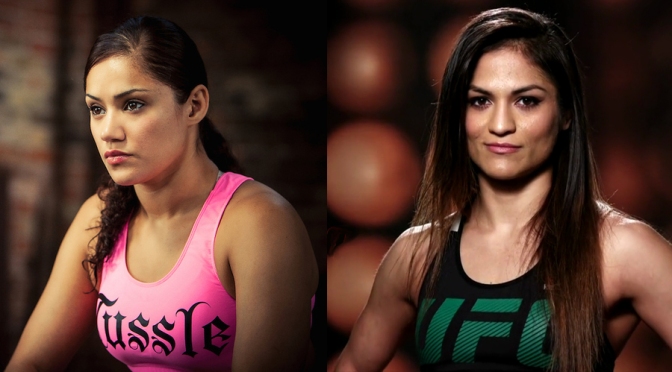 Gina Carano will be honored April 20th at the Artemis Film Festival.

The festival is in its 3rd year and honors women’s action stars, stunt women, and documentary film makers that focus on real women’s stories.

More info can be found at ArtemisFilmFestival.com.

It will be a battle of So-Cal versus Nor-Cal at UFC 210 in Buffalo, New York.

Newly signed Pearl Gonzalez, based out of San Diego, will face Sacramento’s Cynthia Calvillo April 8th, which will be on the main card on pay-per-view.

Gonzalez (6-1) trains out of Team Hurricane Awesome and teammates of UFC fighter Liz Carmouche and Bellator Ilima-Lei MacFarlane. The former XFC champion won the title from current UFC fighter Cortney Casey. Gonzalez is coming off a year lay off due to injury.

Calvillo is coming off her first UFC win over TUF 23 runner up Amanda Bobby Cooper. Apart of Team Alpha Male and a training partner of fellow UFC strawweight Paige VanZant, she is currently undefeated and has an amateur win over Invicta’s Aspen Ladd.

You can listen to an interview we did with Pearl Gonzalez late last year here.

Coming off her TKO win this past weekend, Angela Lee won’t have much time off as she will defend her 115 title against Istel Nunes at One Championship in Singapore May 26th.

King of the Cage has solidified its women’s divisions with 14 fighters now under exclusive contract.

With more options for women to fight, KOTC has decided it was time to develop its own 115 and 105 divisions. Currently they have a pro atomweight champion in Andy Nguyen (will face Bi Nguyen May 26th in San Jacinto, California). Their pro strawweight title is vacant as Danielle Taylor is currently signed with the UFC. Former strawweight champ Jamie Colleen and amateur champion Cynthia Arceo are among the exclusive signees.

InvictaFC has signed four athletes to their roster.

Tracy Cortez, Kelly D’Angelo, Kelly Faszholz, and Milana Dudieva will be under the promotional banner. No word on when they will make their debuts.

Both Faszholz (3-2) and Dudieva (11-5) are coming off UFC stints. Dudieva has nine of her 11 wins by finish and will be dropping to 125. Faszholz submitted in her three wins and her loss to former InvictaFC champion Lauren Murphy won “Fight for the Night” honors.

D’Angelo is currently 2-0 as a pro and wnet 5-0 as an amateur. She will be fighting at strawweight.

Cortez is 6-0 as an amateur and the current Tuff-n-uff 125 champion. She will be fighting at flyweight.

The IMMAF has most of their participants set for their European Championships in Sophia, Bulgaria March 29-April 2.

Hook-n-Shoot had their final show this past weekend.

The pioneer of women’s mixed martial arts decided to close up shop after 22 years. They have the first US based all women’s show  in 2000.

Julie Kedzie and Molly Helzel was honored on the Hook’n’Shoot Hall of Fame on the final show.

You can read and listen to Hook-n-Shoot owner Jeff Osbourne getting the WMMA Press Legacy Award here.

The California State Athletic Commission is cracking down on people who miss weight.

The commission passed a regulation that expands the 20% fine to the win bonus of the winner misses weight.

The CSAC is also going to relook about adding the 165 and 195 weight classes, a measure refused by the Association pf Boxing Commissions last year because some promoters were not on board.