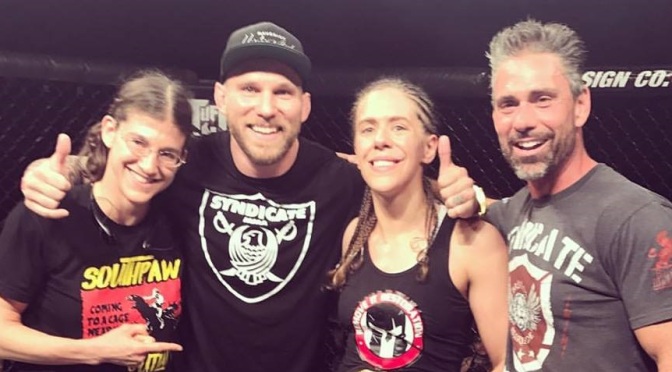 It was nearly at capacity at the Thomas and Mack center in Las Vegas for Tuff-n-uff’s “Pack the Mack” event Saturday night. Two female title bouts plus a 135 contenders bout were on the docket on the 16 fight card.

Tuff-n-uff had streamed the event live on facebook but due to time constraints the stream was interrupted. We are told Tuff-n-uff will be re-uploading the stream and we will update you where you can find it in the coming days.

It was a shocking main event as an injury force the referee to stop the match and hand the title to Crystal Demopoulos. Former champion Cheyanne Vlismas was ahead on the scorecards with several highlight real slams on Demopoulos throughout the fight. In round 3, she fractured her elbow, causing the referee to step in. A disheartened Vlismas pleaded her cause but the ref called an end for the match.

Vlismas told us the injury is pretty serious and had a similar thing happen six years ago. We hope for her healthy and speedy recovery.

Demopoulos told us post fight she is looking to go pro and will be hoping for a call from Invicta.

You can see the end of round 2 here

The first female fight of the night saw undefeated Kiara Ramos (now 4-0) keep her record intact as she got the TKO win over MMA debuter Kenya Lias. It was a slugfest from the git go as both got rocked early. It was Ramos who stayed on point and got the win in 49 seconds. Ramos is in line with a possible title shot against newly crowned bantamweight champ DeJesus.

You can watch the complete fight below.

Sernea DeJesus looked aggressive in her 135 title bout with Arlene Culbreth. “The Southpaw Outlaw” pressed the pace with Culbreth not having much answers to the heavy striking. DeJesus took the unanimous decision win to gain the vacant belt. This also snaps her streak of back to back losses.

We sat down with the champ to talk about the fight on Sunday.

Having Autism, there are hiccups every time she fights. This time, the weigh-ins had loud music as did the arena. She thanks the commission and promotion for understanding and giving her some leeway in having a hat and headphones on as she entered the arena.

Now making Vegas her home, she found it more comfortable to train and lose weight for the fight. With InvictaFC star Roxanne Modafferi and head coach John Wood in her corner concentrating on her, she felt more confident. Not only them but….

“It was great to have my strength and conditioning coach Lorenzo with me. He was in my ear the whole time telling me ‘It’s time to go. It’s time to go.’ He got me amped up but in the correct way so I wasn’t too amped up and I wasn’t sluggish. I was right in the zone ready to go.”

After the win, she got the thousands of fans to sing Happy Birthday to Coach Wood.

The newly crowned champ has no plans at the moment of turning pro and will take a few months to weigh her options. The only thing she has thoughts of doing?

“I think in time if I can correct that loss (to Brieta Carpenter) I would love to rematch her in the pros.”

You can listen to DeJesus’s full interview here.