InvictaFC ends the year with a battle of the top flyweights in the main event.

Jennifer Maia will look to remain on top of the flyweight ladder as she takes on the undefeated Aga Niedźwiedź. The co-main event sees the promotional debut of BJJ sensation Mackenzie Dern taking on former strawweight title challenger Kaline Medeiros .

Weigh-in results, photos, and preview of the fights below.

Jennifer Maia (14-4-1): The reigning champ looks to stay atop the flyweights.

With the UFC crowning its new 125 champ, it is hard not to argue that the winner of this fight is the true number 1 at flyweight.

Maia is coming in on a five fight win streak since her loss to DeAnna Bennett, which includes a win over TUF 26 finalist Roxanne Modafferi. With a win, she would have a huge argument to be signed to the UFC.

Niedźwiedź is coming off an unanimous decision win over former champion Vanessa Porto, which earned her the title shot. The 22 year old is quickly becoming a rising star, and is looking to join her fellow Polish fighters in the UFC.

This should be another hard fought battle for Maia against another accomplished striker. Two ex-factors are Maia’s ground game and Niedźwiedź’s inexperience in championship fights.

Mackenzie Dern (4-0): The undefeated BJJ black belt looks to prove she is ready for the UFC

Kaline Medeiros (8-5):  The Brazilian-American fight looks to make an argument for the strawweight title

The UFC is highly invested in Dern, who has finished 2 of her four opponents. The BJJ black belt had trouble making weight in the past, but was able to tip the scale under the one pound allowance. A win will most likely bring Dern to the UFC.

Looking to upset her plans is former title challenger Medeiros, who was on a five fight win streak before losing to Angela Hill. With the 115 title now vacant, a win gets her back in title contention.

It will be a classic striker versus grappler match-up, with Dern getting a step up in competition.  Where this match ends up will determine how the match winds up.

Janaisa Morandin (9-1): The Brazilian looks to get back into the title hunt

After her first loss, Morandin has an argument still for a title shot. With Livia Souza finally getting her shot in the UFC, a win could get her in the title picture.

Coming off a loss to Japanese superstar Syuri Kondo, Novaes is a last minute replacement for another Japanese fighter in Mizuki. She has won four straight before the loss and like Morandin, is looking to get back to winning.

One of the closer matches on the card, look for this one to do the distance.

Vanessa Porto (18-8): The former title challenger looks to get a rematch

Milana Dudieva (11-6): The Russian star is on the hunt for her first world title

Porto has lost to both of the main event participants, she needs a win or face a three fight skid. Still a promanent fighter in the division, Porto has a win over Roxanne Modafferi.

The UFC vet Dudieva lost a close split decision to Mara Romero Borella, but the new division has proved fruitful none the less. A win over Porto gives her a path to a possible title shot.

Dudieva will be fighting a stronger fighter in Porto, and one of the top fighters in the division. Will Dudieva step up or will Porto come back to her old form. 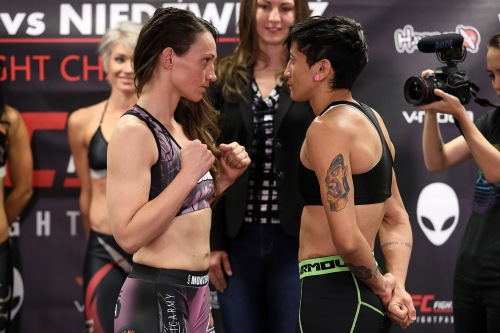 After what was a wild last fight, Montenegro wants to have a solid win to make an argument for a strawweight title shot. Her only losses were by close split decisions.

Jandiroba will be making her US debut, but has a notable win over Lisa Ellis. She has only gone the distance twice and has won all the rest by submission.

Both are talented on the ground, so the intereating part is if they will keep it on the feet. If it does go the ground, expect a great chess match. 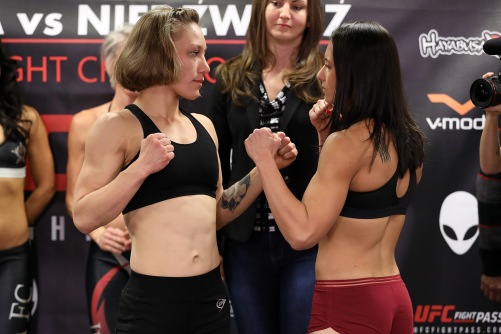 Tessa Simpson (5-2): The rising star looks to work her way to a title

Brown has been on a three fight skid and is in need of a win. Looking better since she came back to atomweight, she lost a decision to Ashley Cummins in her last outing. She has since left her camp to join a new one.

Simpson lost a close split decision to former champion Herica Tibercio in her last outing, but a win could give her an argument for a title shot.

Brown is best in a striking war, and Simpson will look to take it to the ground. Both are predicting finishes.

Christine Ferea (1-1): The striker is looking to continue momentum at 125

Karina Rodríguez (5-2): This fighter looks to be the next star out of Mexico

After a decision loss to Tiffany Van Soest, Ferea is looking for her second win in MMA. The talented striker is wanting to move up the flyweight ranks and a win could do that.

Expect a stand up battle with the two, and possibly a fight of the night contender.

Kay Hansen (pro debut): The young gun looks to impress in her debut

Hansen will be the youngest fighter to compete at Invicta at age 18. Prince is a tae kwon do and Judo black belt.

Both relatively unknown commodities, it will be interesting how these two will start the card off.