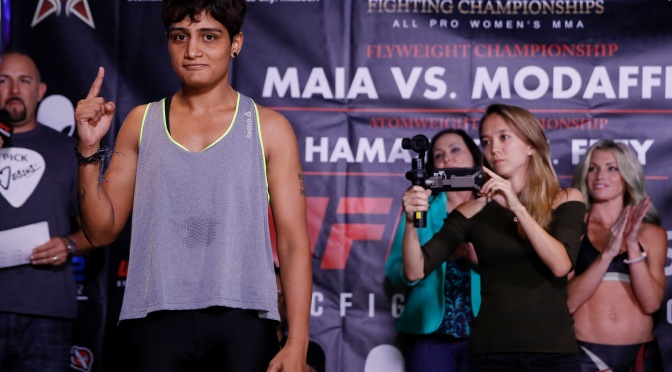 A pioneer in Indian MMA, Manjit Kolekar has her toughest test to date at InvictaFC’s Phoenix Rising tournament May 3rd in Kansas City.

It was announced this week that Kolekar will face Amber Brown in an alternate bout in the strawweight tournament, which will crown a new champion.

Kolekar is a pioneer of the sport in her native India, where her journey in fighting began. Taking up boxing, she looked up to World Amateur Champion and Olympic Bronze medalist Mary Kom.

“She is my role model” Kolekar expressed to us.

The opportunity came up to take part in the Super Fight League, one of the first major MMA promotions in the country. She would end up winning the initial season, going undefeated. She would expand her undefeated streak to 8-0 before coming to Invicta.

Kolekar’s first loss was in Invicta, but things have changed since she made her promotional debut. She decided to relocate to Las Vegas and is now training at Syndicate MMA. The decision to come the gym was an easy decision for her.

“The gyms in India have yet to catch up with the rest of the world, so I came to Syndicate because Roxanne Modafferi was here,” Kolekar explained. “She is a great fighter. I know Coach John Wood is a good coach as well. A lot of great training partners are here.”

“It is very difficult, but I am so happy. The first time I came in I was very nervous.  It was Serena DeJesus and her family; Roxy; and my teammates that have helped me a lot and gave me a warm welcome. I am very happy I am here.”

Kolekar isn’t worried about possibly getting a shot at the title yet, but is looking at getting her first win at Invicta. She stated she is in the best camp she has had as a fighter and is ready for the veteran Amber Brown.

Although she is the most successful fighter in Indian MMA history, she has seen little support from the country itself. Being on a global stage, she hopes she can turn that around and encourage her native country to expand the sport.