Rosy Hayward is an award winning Muay Thai journalist and is the head of the Female Muay Thai Group on Facebook. She is guest reporting for us on the Yokkao 13 event which happened in Bolton, England March 22. 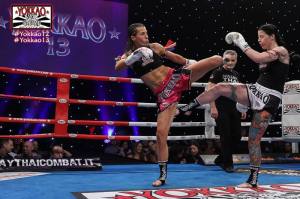 Stefania  Picelli and Brian Calder organised the latest episode of Yokkao, a global promotion bringing class and style and beautiful Muay thai to fight fans the world over. At 57kg the co–main event is a Full Thai Rules match over 5×3 minute rounds  and sees Bernise Alldis (England) versus Tanya Merret (Wales).

The setting is beautiful, fighters make their entrance through a backdrop mimicking a starlit sky, Yokkao logos and branding emblazon the stage and all ringside personnel creating a blended scene on which the fighters and the sport is thrown into vivid relief.

This is Alldis’s comeback fight following a lengthy time out. A much admired star of the sport, news of her return caused a stir internationally, her weight category is populated with legendary talent and the prospect of her adding to it with a successful showing tonight is tantalising. This is a big occasion, with much dependent on the outcome, is that pressure weighing on her?

Bernise Alldis is about to climb over the ropes and jump in at the deep end of the sport again… Pressure? Her fight persona is shark like; the deep end is where she is most at home.

Tanya and Bernise meet center ring for round one and go straight to business no pacing themselves in consideration of the 15 minutes of battle that will follow. When clinching Bernise gets 3 trips for an edge in the dominance stakes early on

Round two reveals that in the clinch both are strong, Bernise lands some well placed right knees , Tanya has looked dangerous with her right hand landing to Bernise’s head. Bernise has a really rangy teep  that coupled with a head kick serves her well and tripping Tanya in the clinch it looks like she has the techniques to take control of the fight at all ranges.

In the third round Bernise ‘s left elbow is landing well At clinch range Tanya’s strength shows and she is  nullifying the attacks there. The action has been see- sawing in the fight but Bernise begins to pick her shots toward the end of the round: teep to the face, right elbow, boxing and kick combinations reign in without an equal response.

Tanya goes for the clinch in the 4th, her best range, Bernises’s boxing and teep are very sharp outside and Tanya works on closing the range, for a while they are trading shots

When the 5th round starts both fighters  have a load of ammunition left. A clinch early on has them trading knees and looking for opportunities with elbows … Tanya is cut . Bernise disengages from clinch range as blood begins to flow down Tanya’s face and zones in on the cut like a shark after its prey. As much as Bernise has learnt her skills and technical excellence – her fight style has a stripped back quality , instinctual, primal, efficient… to say she makes it look easy doesn’t cover it She doesn’t ‘make ‘ … she is. The essence of a fighter courses through her. Jab, teep, elbow  it is chilling to see Bernise’s intensity as she  targets that cut… like a shark on the attack, it isn’t malicious it is just how animals at the top of the food chain are -born to it. A stoppage is on the cards as an elbow lands, a spinning elbow follows and then the bell . Tanya took the fight to points, Bernise takes the win.

I wondered if Bernice would carry on. Was that a toe in the water or are there more matches in line?

The next day the news breaks that Lion fight have invited her to face their star Tiffany Van Soest  in May. Bernise is back and it is good news for the sport.

Lion Fight Muay Thai returns to Vegas May 22 with a trio of female division bouts.

Former champion Tiffany Van Soest is looking get back on the winning track taking on England’s Bernise Alldis. VanSoest won five straight before losing her title to Caley Reese. After winning back to back fights at LFP, she lost to Denise Kielholtz at Enfusion.

Alldis came back this past weekend after a few years absence with an unanimous decision win over Tanya Merrit. She has a notable win over Julie Kitchen.

The match will serve as the co-main event.

Opening the main card, Vegas’s Christine Ferea will take on California’s Laura Salazar. Ferea has back to back wins at Lion Fight as an amateur. Salazar has been switching between MMA and Muay Thai. Both will be making their professional Muay Thai debuts.

The main card will air on AXS TV May 22.