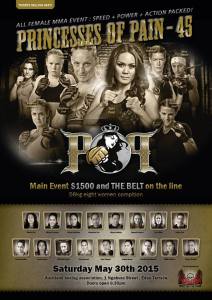 One of the original all female promotions is back in action May 30 in Aukland, New Zealand.

The Princesses of Pain will hold an eight woman, one night 56 kg tournament in what promises to be an action packed night of amateur and professional bouts.

With New Zealand stars Faith Van Duin and Kate Da Silva already making waves on the international scene, a tournament win could see a new star to look out for.

Eight amateur fights will also be a part of the card:

The event isn’t expected to be streamed but watch our twitter feed @WombatSports for up to date info.