If you didn’t get enough blood Halloween night, you got plenty Saturday night in Davenport, Iowa.

Several fighters went to war at InvictaFC 9, with battle scars to prove it. All but one fight went to decision, but most of them kept fans intrigued with displays of amazing striking and some ground work.

Andrea Lee and Jamie Moyle – Breakout Stars of the Night

The future looks bright for two new faces to Invicta.

Andrea Lee is one of the best strikers we’ve seen coming from the amateur ranks, and she didn’t disappoint in her second pro fight. Lee’s striking was not only creative, but crisp and on point. Lee’s mat work was solid as well. Props to Shannon Sinn for hanging in there against a tough opponet, but Lee could be the future of the flyweight division.

Tuff-n-uff tournament winner and pro debuter Jamie Moyle also showed some impressive striking in her win over Jenny Liou. Syndicate MMA has improved Roxanne Modafferi’s striking game, and Moyle goes to show that it wasn’t a fluke by any stretch of the imagination the Vegas based gym is one to look out for. Liou was still a game fighter on the ground, but Moyle could develop as a big part of the new wave of strawweights in Invicta.

Moyle would get a “Performance of the Night” award for her efforts.

In what was a closer battle than we expected, Liz McCarthy showed better control on the ground in the later rounds of her fight with the #4 ranked Amber Brown. It was the blood that McCarthy was displaying on her face that gave Brown the split decision win, but McCarthy looked great in the loss and this setback won’t be a big one going into her next fight.

As for Brown, she solidifies her ranking and is one step closer to getting a world title shot. Her striking is there, but her ground game needs some serious work before considering a run for the gold.

Mizuki and Kowalkiewicz’s Striking War was a Thing of Beauty

Some people thought Invitca’s strawweight talent would diminish once the UFC took a good chunk of the fighters for TUF 20. These past two cards proved that wrong.

Seeing Mizuki (she decided to drop the “Inoue”) and  Karolina Kowalkiewicz in the cage was like seeing two of the top pro boxers on the planet trade. There wasn’t too many “ahh” moments, but Mizuki’s speed versus Kowalkiewicz using distance saw technique on display, in a fight that could have went either way.

Kowalkiewicz took the split, but Mizuki should not be ashamed at her performance at all. This took “Fight of the Night” honors and could be a candidate for “Fight of the Year”.

Amanda Bell seemed pretty happy and ready to do some damage when she entered the arena. Bell dominate Maria Hougaard for 4:56 before the ref stopped the fight in the only finish of the night. No clue why she didn’t get a Performance of the Night Bonus (or why she wasn’t on the dais at the post fight presser).

If Cyborg vacates the 145 title, Bell seems primed to fill that spot.

Pa’aluhi is always someone interested in fighting the best, which has cost her some losses in the past. Last night, we saw those losses pay off.

Kaitlin Young punished Raquel Pa’aluhi through the first round of their fight, but Pa’aluhi never let it discourage her. Having a strong wrestling game, Pa’aluhi went to the ground where Young has had trouble in the past. Pa’aluhi would take the last two rounds and get the win and a Performance of the Night award to boot.

Pa’aluhi is now one of the top bantamweight prospects in Invicta and has helped the division become relevant again.

The Curse of the Clinch

Takayo Hashi had a game plan and it helped her survive five rounds with champion Barb Honchak, but it didn’t win the battle at all.

Honchak tried to engage in striking with Hashi, only for Hashi to take it to the cage wall to use clinch work. Honchak, to her credit, was using short range striking and was better at pummeling and reversing position. The only highlight was Hashi eventually getting a trip takedown from the position, but otherwise it wasn’t an exciting fight to end the night.

Part of the blame could go to the ref, who might have broke it off a bit more often then he did. You really can’t blame Honchak, who we suspect will have better fights with dance partners in the wings.

Maegan Goodwin wasn’t mentally there against Kelly McGill, and part of the blame could be due to her grandfather’s passing. I don’t think people would have judged her if she pulled out due to a family emergency, but missing weight and losing the way means she needs to work that much harder in her next fight to earn some respect from the fans

Maria Hougaard needs to take a step back and re-think how to proceed in her career. With a great record in Europe, she may think about training in the US for a period of time so her game can compete with a higher class of competition.

Kaitlin Young Still Game but Needs to Take Her Time

Outside of Ronda Rousey, the Glendale Fight Club’s female team has been in a slump. Young only recently joined the team and her grappling game is in need of some major work.

Young still proved the reason why Invicta loves her – she bring exciting fights whenever she hits the cage. Once she gets another 8-12 months in with Rousey and Shayna Baszler, she could be one of the top fighters in the division again.

Nicdali didn’t really get her head in the game against Jodie Esquibel and it may have sparked the retirement of the 10 year vet of the sport.

Having won only once on her past 5 fights, Nicdali has on several occasions pondered hanging up the gloves. With back to back losses to fighters that are two of the best in the division and a .500 record, it is a pretty good time for her to help the next generation of fighters and end what could be a solid argument for WMMA Hall of Fame inclusion. 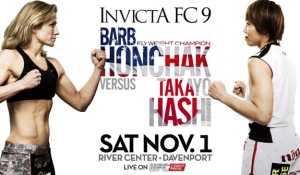 After announcing the main event of Barb Honchak taking on Takayo Hashi for the flyweight title, Invicta released the rest of their 9th card today and it is stacked.

The card sees the return of Japanese superstars Ayaka Hamasaki and Mizunki Inoue. Hamaski will take on Brazil’s Herica Tiburcio in what could be a #1 contenders match for the atomweight title. Inoue, the current DEEP-JEWELS 115 champion, will take on undefeated Polish fighter Karolina Kowalkiewicz in what could be a title eliminator for champion Katja Kankaanpää.

Two European vets are set to make their promotional debuts as Belgium’s Cindy Dandois will take on a returning Kaitlin Young, and Denmark’s Maria Hougaard-Djursaa taking on Amanda Bell.

The event will be November 1 in Davenport, Iowa, and will be available live on UFC Fight Pass.

Here is the full fight card:

Tuff-n-uff will continue its commitment to Invicta with two more tournaments.

Thanks to the success of their 115 pound series, the promotion announced the start of an 145 and 155 tournament November 7 in Las Vegas. The winner will be signed to InvictaFC.

The two 4 women tournaments will culminate in January with the crowning of two champions. Jamie Moyle won the 115 tournament title earlier this year.

Tuff-n-uff is looking for fighters with three fights and a winning record to participate. If you want to take part comment and we will send you the details.