“Now it’s time to take it a bit easier. I will write more specifically about this once I’ve returned to Finland. Thank you for all the support I’ve received from all of you,” Kankaanpää released in a statement.

Kankaanpää (10-3-1) lost a controversial decision to DeAnna Bennett Saturday night on the promotion’s 14th event. She went 9 straight bouts without a loss before losing to Joanne Calderwood in her second InvictaFC bout. She soon won the belt by defeating Stephanie Eggink for the vacant title.

Kankaanpää was the first Finnish female fighter to find global success in MMA, winning the country’s first world championship in the women’s divisions. She also has contributed outside the cage, having helped with all women’s MMA seminars a few times a year.

She leaves as one of the top prospects outside of the UFC in the strawweight division.

We wish her the best in the future.

The other big news came with InvictaFC president Shannon Knapp announced Cyborg Justino would be dropping to 140 for her next fight. The match will take place at the November event, with the exact date and location to be announced. No word on an opponent. 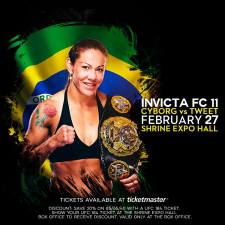 In what is one of the biggest weekends in the women’s divisions’ history, Invicta looks to gain a lot of traction as they co-headline with the UFC in Los Angeles February 27th weekend.

InvictaFC president Shannon Knapp talked to us Friday to catch us up on what to expect in 2015 and her opinions on PED testing.

Knapp confirmed to us strawweight champion Katja Kankaanpää will be defending her title at InvictaFC 12, with an opponent, date, and location to be announced in the coming weeks. She also plans on revealing the rest of the 2015 schedule.

Knapp affirmed Ayaka Hamasaki will be the first challenger to atomweight champion Herica Tiburcio, with the match to take place on the next few cards.

As for the lingering question of the bantamweight title, she is expecting to crown the champion by the end if the year, but is awaiting certain things to fall into place. She has stated on several occasions Tonya Evinger will be one of the fighters vying for the vacant title.

Concerning the lightweights, she explained the division is still a “work in progress”. Knapp mentioned the possibility for “superfights” in the future; some which could be above 155.

When asked about the growing PED testing failures by some athletes, Knapp could only talk from her own experience within her own promotion.

“If we are in an area that doesn’t require testing, we do it anyway,” Knapp expressed.

She also came to the defense of her champion Cris “Cyborg” Justino who has been fodder of many accusations of her taking PEDs. Justino tested positive in 2011 for Stanozolol, which is used to lose weight.

“I tested her before I even signed her,” Knapp explained. “Justino didn’t know ahead of time. We have her tested in and out of competition and has tested clean every time. I am behind her 100% as long as she does so.”

In other notes, we were able to confirm atomweight standout Simona Soukupova will be returning to the Invicta cage soon. Another European, Mellony Geugjes, will also being making her Invicta debut this year.

Finally, Zoila Frausto is still under the Invicta banner, and will hopefully be returning to strawweight by the end of the year.

As for their upcoming 11th card…

“Expect some surprises,” Knapp emphasized. “The fans will be amazed at what they will see and who is going to be at the event.”

InvictaFC 11 will emanate from the Shrine Auditorium in Los Angeles February 27. The event will be streamed on UFC Fight Pass.