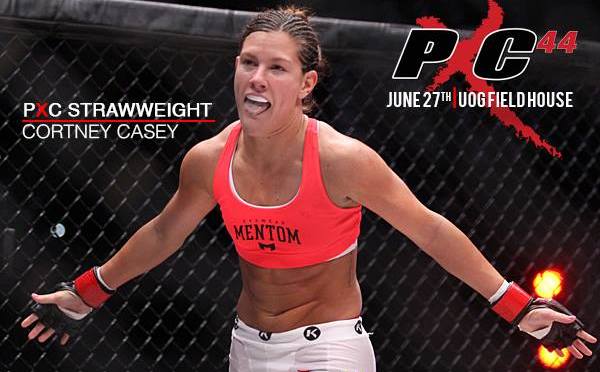 The match many fans were waiting for has been put off again.

Bec Rawlings was expected to face Joanna Calderwood in a grudge match in Calderwood’s home country of Scotland at UFC Fight Night July 18th, but Rawlings has gotten an injury while training and is off the card. XFC and Tuff-n-uff vet Cortney Casey-Sanchez has stepped up on eight days notice to take the fight. The UFC UK announced the fight Thursday night.

Casey (4-1) had a stellar amateur career having won the Tuff-n-uff strawweight title by a highlight reel flying armbar. She entered the pro ranks defeating Kelly Warren. She would come up short against Pearl Gonzales for the XFC title, but won three straight for PXC MMA. All of her wins were by first round finish.

The match will be a part of the main card and will air on UFC Fight Pass July 18th.

Former pound for pound boxing world champ Holm (8-0) is coming off a split decision win in her UFC debut over Raquel Pennington. Six of her wins were by TKO or KO.

Reneau (6-1) has yet to be finished, having finished all but one of her wins. In her last fight, she defeated Jessica Andrade by triangle choke.

The winner would make a case for a possible title shot against champion Ronda Rousey.

The match will air on Fox Sports 1 July 15th.

The UFC has been busy Tuesday announcing two more bouts in the women’s divisions.

With Jessica Penne being brought in to face champion Joanna Jedrzejczyk, Juliana Lima was left without an opponent for UFC Fight Night 67 in Goiânia, Brasil on May 30th. The promotion has signed undefeated Ericka Almeida to fill that spot.

Almeida  (7-0) is the Jungle Fight’s strawweight champion, and was signed to Invicta bu had yet to be her debut there. All of her wins were within 2 rounds, with six subs to her credit.

Lima (7-2) is coming off a decision win over Nina Ansaroff in Brazil. Her only losses are to Jedrzejczyk and former Invicta champion Katja Kankaanpaa. She has yet to be finished.

The fight will air most likely air on Fox Sports 1 May 30th.

After a year of waiting, Sarah Moras has finally got her second match in the UFC.

Moras will take on Jessica Andrade at UFC Fight Night in San Diego July 15th. Currently 4-1 as a pro, she won her UFC debut against Alexis Dufresne. She would make it to the semi-finals of TUF 18, losing to Juliana Pena.

Andrade (12-4) has won three straight before losing to Marion Reneau in February. She is a five fight veterain of the UFC.

The match will most likely air on Fox Sports 1. 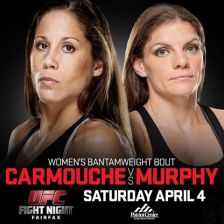 Two fan favorite bantamweights are set to take the octagon in Farifax, Virginia.

The UFC announced Tuesday Liz Carmouche and Lauren Murphy will square off April 4 on a “UFC Fight Night” card.

Carmouche (9-5) is looking for a much needed win, having lost back to back to two of the top 5 bantamweights; Miesha Tate and Alexis Davis. Carmouche’s only UFC win came by a TKO over Jessica Andrade.

Former Invicta champion Murphy (8-1) got her first professional loss in her UFC debut to Sara McMann by a close split decision. Six of her 8 wins came by way of TKO.

It didn’t take long for Marion Reneau to make an impression in the UFC.

After her one-sided win over Alexis Dufresne, Reneau will make a quick turnaround to face Jessica Andrade at UFC Fight Night in Porto Alegre, Rio Grande do Sul, Brazil February 22.

Reneau (4-1) fought Dufresne this past weekend in what was a striking clinic. It was the first time Reneau won by a decision, having won the rest of her fights via finishes. The performance garnered her an apology from UFC President Dana White, who rejected her from being a participant in “The Ultimate Fighter 18”.

Reneau will have her toughest challenge to date in Andrade (12-3) who has won three straight. Her most recent win saw her submit Larissa Pacheco, handing the fellow Brazilian her first loss.

The fight will most likely take place on the preliminary card. It will either air on Fox Sports 1 or stream on UFC Fight Pass.

InvictaFC flyweight title contender Nina Ansaroff is the latest to sign to the UFC.

Having come off a knockout win over Munah Holland, Ansaroff (6-3) has won five straight, all finishes. A long time training partner of UFC fighter Amanda Nunes, she is familiar with fighting in Brazil. Ansaroff also tried out for the Ultimate Fighter 20.

Lima (6-2) is coming off a decision loss to Joanna Jedrzejczyk in their UFC debuts. Her only other loss is to current InvictaFC champion Katja Kankaanpaa.

The match is expected to be on the preliminary card, which will air on Fox Sports 1 November 8.

The UFC continues to expand their strawweight division as Kailin Curran has signed to the promotion. She and current signee Paige VanZant will slug it out at UFC Fight Night in Halifax, Canada October 4 according to a post on MMAFighting.com.

Curran (3-0) had signed to PXC last year, getting wins over InvictaFC vet Kaiyana Rain and JEWELS vet Emi Tomimatsu. The Hawaiian trains out of Reign Training Center in California with Mark Munos and Jake Ellenberger.

VanZant (3-1) had victories over Jordan Gaza and Amber Stautzenberger before getting her first defeat at the hands of Tecia Torres. The 20 year old was too young for the TUF 20 house and was directly signed to the UFC. She trains out of Team Alpha Male, home of bantamweight champion T.J. Dillasahw and UFC star Uriah Faber.

The match will most likely be a preliminary bout. It will either air on Fox Sports 1 or on UFC Fight Pass.

Long time Russian MMA standout Milana Dudieva will look to make an immediate impact in the UFC as she heads to China to face Elizabeth Phillips. The match is planned to take place at UFC Fight Night Macao August 29 according to several sources.

Dudieva (10-3) is a five year vet of the sport, racking an eight fight win streak after her first loss. She has wins over Sheila Gaff and Danielle West with six submissions to her credit.

Phillips (4-2) was on a four fight win streak before losing a last minute bout to Valerie Latourneau in both fighter’s official UFC debuts. Teammate of TUF 18 winner Juliana Pena, she finished in 3 of her four wins.

The fight will stream on UFC Fight Pass August 29. The monthly service is $10.

Both coming off hard fought wins, Jessica Andrade and Valerie Latourneau are looking to climb the ladder in the UFC.

The two are set to square off at UFC Fight Night 51 in Brasília, Brazil September 13th. The match was posted on the UFC website Monday.

Andrade (11-3) has recovered from her UFC debut loss to Liz Carmouche, she has won back to back decision. She defeated Rosi Sexton and Raquel Pennington respectively.

Latourneau (6-3) made her official UFC debut against in a last minute fight Elizabeth Phillips gaining a decision win. The TUF 18 hopeful has 4 TKO/KOs to her credit.