In action from this morning, Ann Osman defeated Aya Saeid Saber by TKO 3:15 of round 1 at OneFC in Kuala Lumpur.

Jessica Aguilar’s fight with Kalindra Faria is most likely off.

XFC president Myron Molotky was surprised when World Series of Fighting announced the title bout last week, since Faria was under an exclusive contract with the XFC. Faria’s management failed to ask permission from the XFC for the fight, and the XFC is now refusing the bout to happen.

This is a disappointment to fans, who see Faria as the one opponent not signed to the UFC or Invicta that could give Aguilar a run for her money.

WSOF and Faria’s management have yet to make a statement.

Conflict MMA will have an all female amateur card November 8 in Columbia, South Carolina.

In the main event will feature amateur prospects Alyssa Vasquez taking on Alexa Conners for the promotional bantamweight title, while the co-main will see Jennifer Darr taking on Ashley Samples for the vacant strawweight title.

Also announced, Charity Walker will battle Andy Nguyen. We are expecting more fights to be announce this coming weeks.

Molly Dupertuis announced on ProWMMA Now that she will be hang up the gloves after her fight with Nichole Rainey November 22 at V3 Fights in Nashville, Tennessee. A lingering shoulder injury is forcing her to retire but she wanted one more fight, win or lose.

This week we compiled a list of current world boxing champions to help you get to know who’s who. You can see the list here.

Sunday at 9:30 a.m. pst/12:30 p.m. est on the podcast, we will talk to Jessica Richer, who will be participating in the Tuff-n-uff lightweight tournament. We will also discuss training with Team Hurricane Awesome and Liz Carmouche.

You can listen to the podcast here.

With the already announced Cyborg Justino on InvictaFC 10, Charmiane Tweet announced she will also be a part of the card. Rumors are Irene Aldana, Vanessa Porto, and Jennifer Maia will also be in action.

We told you last week that Sara McMann stated she was close to getting a match with Miesha Tate. This past week, however, Bethe Correia has challenged Tate. Tate responded she is more than willing to fight her.

Having been doing boxing matches the past year, Jen Tate maybe returning to the cage soon.

In what was supposed to be a fight at a catchweight of 152, Jozette Cotton and Holly Lawson will now battle at 167 pounds at Bellator in Council Bluffs, Iowa, which will stream on Spike.com. The prelims start at 4 p.m. pst/7 p.m. est.

Cotton came in at 167 pounds, 15 pounds over the agreed weight and will forfeit 20% of her fight purse to Lawson. Lawson decided to take the fight despite the weight difference.

This will be the first female fighter under the Bellator banner since Scott Coker took over as president of the promotion. The last female bouts Bellator held were in March 2013. 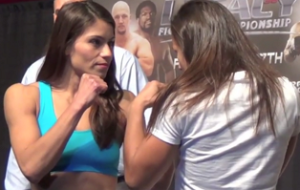 ADCC World Grappling champion and undefeated fighter Michelle Nicolini will make her US MMA debut against InvictaFC vet Norma Rueda Center at LegacyFC in Albuquerque, NM which will air on AXS TV.

Nicolini (2-0) has back to back armbar wins in the first round. A black belt in jiu-jitsu, she is considered one of the top submission grapplers on the planet.

Center (2-1) went undefeated as an amateur and won her first two matches before losing to TUF 20 competitor Joanne Calderwood at Invicta. Training at Jackson-Winkeljohn’s MMA, she has a solid wrestling background.

In other pro bouts: