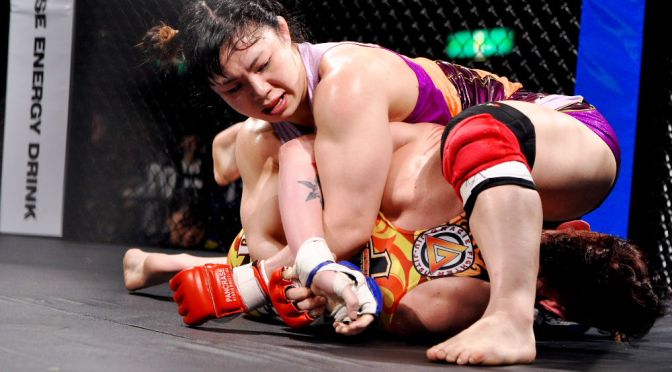 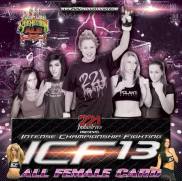 We are gaining unprecedented access to the upcoming Intense Championship Fighting all female card.

We will have full coverage of the event, from weigh-ins to post-fight, starting Thursday, including video interviews with all 14 fighters.

We expect to announce a stream for the event Thursday.

Amanda Kelly and Kerry Hughes look to recover after their first losses at Cage Warriors as they will square off at the promotion’s 69th event June 7 in London, England.

Hughes (1-1) lost to Agnieszka Niedzwiedz by decision in her Cage Warrior’s debut. Hughes would go 3-0 as an amateur before winning her debut over L.J. Adams.

The fight will stream on MMAJunkie.com June 7.

Shino VanHoose will make her long awaited U.S. debut as she faces Tyra Parker at Gladiator’s Challenge May 31 in San Diego. CA.

The 19 year old VanHoose (3-3) started her pro career at age 15, going 3-0. She would take current DEEP-JEWELS champion Seo Hee Ham the distance in her last fight, losing by decision. VanHoose had moved to the U.S. last year.

Parker (3-4) had submitted her opponents in all of her wins inclduing an armbar over Michele Gutierrez. Parker is coming off a loss to  Kristi Lopez by a close split decision. This will be Parker’s debut at strawweight.

XFC vet Brianna VanBuren will return to action as she will take on Maria Andaverde at West Coast Fighting in Sacramento June 28.

VanBuren (3-1) has back to back wins including a decision over Patricia Vidonic. Andaverde is looking to snap a two fight skid, having won her pro debut in 2011.

The International Women’s Boxing Hall of Fame ceremony will be streamed live and free at LDLTV.com on July 10th.

You can read about the inductees here.

Ava Knight has gotten a job with the UFC, but she won’t be doing MMA anytime soon.

Knight reported last week she will be one of the boxing coaches at the UFC Gym in Las Vegas.

Cat Zingano has been cleared to start training and compete again. Zingano had turned down a fight with champion Ronda Rousey in July due to personal issues, so we don’t expect her to return to the octagon until late summer or early fall.

For those who are keeping track (like we are) out of the 36 fighters that tried out for TUF 20, several have booked matches in the coming weeks. Besides the a fore mentioned, Maria Andaverde, Brianna VanBuren, and Tyra Parker, both Lybarger sisters are also taking in fights this month. Obviously if they were picked they wouldn’t risk injury if they were on the short list of possible people for the house (and neither would the UFC we assume).

The UFC insisted they didn’t allow losing records and those with only one or two fights on their record. If you do the math like we did, that gets us under 20. We expect the number to decrease quickly in the coming weeks.

New Zealand’s Kate da Silva and Faith van Duin are campaigning to be on the UFC’s New Zealand debut card June 28. Silva (7-1) and Duin (4-0) squared off in the finals of the Storm Damage tournament this past August seeing Duin getting the triangle submission in round 4.

Rin Nakai gains another solid victory as she defeats InvictaFC fighter Sarah D’Alelio by unanimous decision at Pancrase in Japan.

Nakai (16-0-1) used her grappling to control most of the match, getting the nod from the judges. Nakai has been on a roll with decision wins over Tara LaRosa and now D’Alelio.

Invicta’s newest flyweight signee has earned another win before her promotional debut.

Joanna Jedrzejczyk (5-0) remains undefeated as she defeated Spain’s Karla Benitez at Arena MMA in Warsaw, Poland. The match was all standing, with Benitez the aggressor in the first round. It was Jedrzejczyk counter-punching that proved more effective and gained her the unanimous decision.

In other pro matches:

In amateur action this past weekend:

It was a loaded week of for title bouts.

Also on the card, Nicole Wesner KOs Sandra Zekic in round 2.

In other boxing action: